No individual Can Do it Alone

An increasing number of leaders are discovering that effectively running an organisation, whether a business unit, a small company, or a large corporation is harder than ever before. It isn’t however, that senior leaders are less skilled or less experienced than in the past. Nor are the teams that they lead in any way inferior to those of the past.

Instead, it is the changing roles of both the leader and team member which have now been reshaped in a cauldron of intense competition and relentless change that has come about through a VUCA (volatile, uncertain, complex, ambiguous) World.

Almost everyone excepts that we live in a VUCA world, however in terms of the future, Peter Hawkins in his 2017 book Leadership Team Coaching writes, “If you think the last 10 years was a VUCA period of hyper-velocity change, then tighten your seat belt, summon up your courage and take a deep breath, for the next 10 years will almost certainly be even faster and more challenging.”

With the current emphasis on globalisation, productivity and growth, it’s all about scope, speed, and customer intimacy where leadership teams must consistently ensure that client’s needs are met (and often exceeded) and that such needs to happen immediately.

Senior leaders therefore not only need to run their business and run their teams, but at the same time, also focus on transforming the business and its wider system.

In short, it is absolutely clear that the top roles in any company or organisation outdistance the capabilities of any single person.

It is little wonder therefore that a growing number of senior leaders are either declining the top job or choosing to opt out. Their jobs are becoming relentless and all consuming and many are leaving because they see not only what it is doing to themselves, but to their family and loved ones. It is simply not worth it.

Added to the complexity and rapid change in our world is the perpetual myth that we believe that the person at the top is in fact, the star in shining armour who is going to lead us out of the wilderness and into the promised land. He or she will save the company and turn it around and make massive profits while at the same time doing so in an environmentally friendly and sustainable manner.

As the leadership guru Warren Bennis states in his 1997 book, Organizing Genius: The secrets of successful collaboration:
“Our mythology refuses to catch up with us. And so we cling to the myth of the Loan Ranger, the romantic idea that great things are usually accomplished by a larger-than-life individual working alone. Despite evidence to the contrary – including the fact that Michelangelo worked with a group of 16 to paint the Sistine Chapel – we still tend to think of achievement in terms of the Great Man or the Great Woman, instead of the Great Group.”

Interestingly, he wrote that over 20 years ago…and nothing has really changed. The myth is still being perpetuated. A tad slow to learn aren’t we?

What therefore, is a way around all this?

Theoretically, the obvious answer is that the Chief Executive, General Manager, Managing Director or the “boss” needs to draw on the rich pool of knowledge, talent, experience, entrepreneurship, perspective and creativity embodied within the senior leadership team.

Of course, every top executive surrounds themselves with a group of top advisors and managers who are meant to carry out the mission of the organisation.

In reality, though this does not really happen.

In fact, quite the opposite can occur. How does a top executive herd a group of cats where each “cat” has their own agenda and vision with little or no team focus, no shared direction and therefore, little, if any traction. Sure, it looks like lots of people are doing “stuff”, but is it the right stuff and is it really benefiting the organisation as a whole? 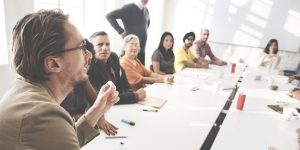 Typically too, each of these “cats” will certainly say that they are all committed to the organisation and are all pulling together, but the reality is that egos get in the way (eg., power, control, money) which plays out in office politics, in silos developing, in clichés, in playing favourites, gossip and inuendo, and in withholding information.

As Peter Senge from MIT Sloan School of Management is reported to have said:
“It is amazing how often you come across teams with an average intelligence of over 120, but the team functions at a collective intelligence of about 60.”

What happens for example within a leadership team that is under pressure and being overloaded, is that they will allocate responsibility for a specific stakeholder group to an individual director or senior executive. For instance, the financial director or corporate affairs director looks after the investors; the human resources director the employees; the sales director the customers; the compliance director the regulators and so on. It is easy to see then how this can lead to systematic stakeholder conflict in the leadership team that occurs between these various leaders and as such, a team that is meant to be fully functioning breaks down.

Ruth Wageman and her colleagues at Harvard University write in their 2008 book Senior Leadership Teams that in their research;
“Typically, there are two or three team members in any executive team who struggle with taking on an enterprise perspective rather than maintaining the traditional functional or operational orientation. These individuals may handle their individual leadership responsibilities very well and therefore be regarded by the leader as definite keepers. They are not derailers, but rather are leaders who are struggling a bit to make the transition to teamwork.”

Needless to say, if it is true that the group only moves as fast as its slowest members, then these two or three executives will cause the Executive Team to falter and they will inadvertently sabotage the progress of the group.

How then, does a team really become a team?

What is Team Coaching?

A critical skill now for any leader given that they are not able any longer to do it all themselves is to be able to create real teams that function really effectively. As was mooted above, this is easier said than done.

In other words, the key skill for leaders is not only to know how to coach their direct reports, but more importantly, be able to coach the whole leadership team. This means developing the team to move from a hub and spoke team dependent on the team leader, to one with much greater degrees of shared leadership and collective accountability and responsibility.

Much of the growing interest in team coaching has come from the realisation of the limits that can be achieved through individual coaching and leadership development, which can certainly help create strong individual leaders, but leave in place misaligned and poorly functioning leadership teams. 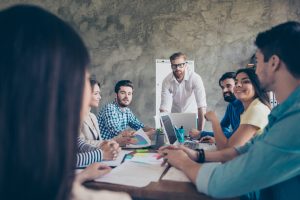 Jennifer Britton in her 2013 book, From One to Many points to two key definitions of team coaching, namely:
• “The team improve performance, and the processes by which performance is achieved, through reflection and dialogue.”
• “Coaching a team to achieve a common goal, paying attention to both of individual performance and group collaboration and performance.”

In their 2008 book in the Senior Leadership Teams, Ruth Hackman and her colleagues state that:
“Effective team coaching addresses the task-related behaviour of the team with the intent of helping it develop and sustain three things: (1) high levels of motivation for the team’s collaborative work, (2) effective collective approaches to team tasks, and (3) the ability to identify and deploy all the considerable talent that team members bring to the table. High quality team coaching is about the work that members must accomplish together.”

In their 2006 book, Coaching, Mentoring and Organizational Consultancy; Supervision and development, Hawkins and Smith defined team coaching as:
“…enabling a team to function at more than the sum of its parts, by clarifying its mission and improving its external and internal relationships. It is different therefore from coaching team leaders on how to lead their teams, or coaching individuals in a group setting.”

Team coaching therefore is a sustained process of dialogue, reflection, learning and action occurring over time.

What is the difference between Team Building, Team Development, Team Facilitation, Team Training, and Team Coaching?

With respect to teams, there have been a plethora of terms. Do they all mean the same? Are there differences? In short, the answer to the first question is “No” and the answer to the second is “Yes.” Let’s explore further.

Team building is an initial stage in the life of a team’s development (see below) where the team focuses on team bonding with the team members understanding, communicating and relating better to each other by getting to know each other more. This might involve using some psychometrics including personality profiling or perhaps outdoor team challenges or social activities as a way of improving or creating trust in the team.

Team development is any process carried out by a team, with or without assistance from outside, to develop its members’ capability and capacity to work well together on their joint task. For example, there is the familiar Tuckman model from 1965 of the various stages of teams including Forming, Storming, Norming and Performing as it goes about its development process. Team development can take several forms including outward-bound exercises to fun activities or away-days.

However, the research is clear that team-bonding and team-activity events have little impact on actual team performance (see Peter Hawkins, Leadership Team Coaching, 2017, Page 72) and do not translate into improved daily performance at the work front.

For Team Facilitation, Training and Coaching, see the table below: What are the Benefits of Team Coaching?

As Jennifer Britton outlines in her 2013 book From One to Many, the table below outlines team coaching benefits: What is the Optimal Group Size for a Team?

In terms of size, because team coaching is an intense kind of process, the International Coach Federation indicates that the group should be no more than 15 persons. However, many coaches surveyed in the Jennifer Britton book Effective Group Coaching, reported that the optimal size for them was between four to eight people. 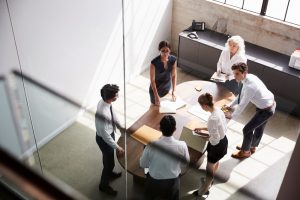 In the Foundational Course for the Team Diagnostic Survey, both Ruth Wageman and Krister Lowe state that the number of linkages between team members dramatically increases as the team’s size grows. They argue that once a team begins to get above 6 or 7, the opportunity for process problems increases exponentially.

In short, keep the team size to single figures and anything above 8 or 9 in particular is going to create substantial issues.

No CEO or “boss” can make a leadership team great. Sadly though, experience shows that in the main, leadership teams do not provide the solidarity, focus and drive that is critical to taking a company or business to its optimal level of growth, productivity and profit. Individual alliances, agendas and egos typically get in the road and either slow the group down or sabotage its outcomes.

While leadership development courses have been around for decades and individual coaching has really only gained traction over the last two decades, neither of these have really been successful in guiding leadership or senior teams to effectively perform.

Team coaching therefore has now come into the fore over the past decade and especially over the last 5 to 10 years or so as an important means to allow teams to be fully productive where they are clear on their purpose and their structure and where they have mutual respect for each other, acknowledging each other’s talents and skills and providing support to each other as they strive to achieve the goal holding each other accountable.

Overall, team coaching is a relatively new model for allowing groups to effectively work together to produce outstanding results.