Generally these days, you don’t have to go far to hear people refer to someone as a narcissist. It could be socially at a party or gathering, it could be in the staff room at the workplace or it could be around the family table. The term is now relatively common place in our language. But, what is a narcissist? How did they get that way? How are narcissists as parents? 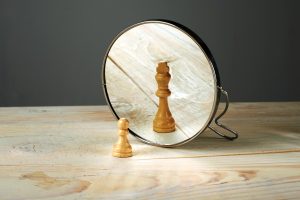 Although we loosely use the term to describe someone who seems to be ego-centric and the centre of their own world, true pathological narcissism has always been rare and remains so. According to Rebecca Webber in her article in “Psychology Today” (Sept-Oct 2016), it affects around 1% of the population and apparently this figure hasn’t changed since clinicians started to measure it in the late 1970s.

Similarly, Dr Ross Smith in this workshop titled “Views on Narcissism” presented on 25th November 2016 (SA Branch of the APS College of Clinical Psychologists), indicated that the prevalence was between 1-2% in the general population (0.7% for males and 1.2% for females).

So what is it exactly?

Essentially, the real narcissist (ie., the Narcissistic Personality Disorder) is typified by the following seven characteristics:

However, there is also the suggestion that there are two forms of narcissism ie., two sub-types. There is the “grandiose” form as indicated above and there is also the “vulnerable” form. The former is about grandiosity, social charm, failure to respond to the needs of others, invulnerability, entitlement, aggression and dominance. We have covered this above. The later though is still about the grandiosity, but this actually masks a hypersensitivity to criticism, self-doubt, deep feelings of inadequacy, incompetence, inferiority and a sense of worthlessness. With this sub-type, the grandiosity is simply a facade that covers feelings of worthlessness and inadequacy.

It is also a truism that almost all of us at some time or another demonstrate some aspects of being narcissistic. For example, there is the person who might indulge in the occasional selfie and talk about their accomplishments. At times, we might be a tad vain. This is normal behaviour. The narcissist however, demonstrates the above characteristics on a continual and permanent basis.

How did the narcissist get that way?

What produces a narcissist? Essentially, it is all about the first 12 months of childhood and perhaps the first few years. As the Jesuits quite rightly say, “Give me a child until they are seven and I’ll show you the person.”

For the grandiose type, typically they were spoilt as a child where they were the centre of the universe. These parents do not set boundaries, they give the child everything they want, give constant praise, do not allow the child to take responsibility for their actions or behaviour and tend to blame others for any deficiencies in the child’s behaviour, talents or abilities; it’s everyone else’s fault. This is the perfect child; he or she can do no wrong.

For the vulnerable type, these parents were generally cold, lacked warmth, and were highly critical and fault-finding. The narcissistic child therefore develops a perfectly lovable “grandiose self” to counteract feelings of inadequacy and embarks on a lifelong search for praise and adulation from which they were initially deprived.

How do narcissists perform as parents themselves?

If their own parenting was so abysmal, how do they manage when they are actually parents? Joanna McClanahan in a recent article titled, “Narcissistic Parents are Literally Incapable of Loving Their Children” argues just that. Because narcissists do not have the ability to emphasise with others, they do not have the capacity to love either and this includes their children. The narcissist parent sees the child simply as a possession who can be used to further their own self-interests.

Since the narcissist views the world as black or white where things are either seen as perfect/special/ideal or instead, seen as worthless/rubbish/harmful, and there is no grey or in-between, then, they treat their children according to these two extremes. This makes the child either the narcissist’s primary source of comfort or their punching bag.

Naturally enough, since every child wants their parent’s love, support and encouragement, they will desperately try to please the parent in order to try to get onto the “love” side of the spectrum rather than the more spiteful, darker side. This means therefore that they will give in to their narcissistic parent and let the parent control their lives to “keep the peace”.

Interestingly though, as the children grow older, and become more independent, the narcissistic parent will try to retain control by deliberately sabotaging their child’s sense of being and sense of self-worth. Not surprisingly, the parent resorts to somewhat malicious games by creating unhealthy competitions, using guilt and blame, giving ultimatums, and putting the child down by calling them names, telling them they are worthless, hopeless, an idiot, stupid and that they’ll never amount to anything.

It comes as no surprise that the children who grow up in this type of destructive environment develop feelings of guilt and low self-esteem which is carried on into adult life. Hence, these children are less likely to develop a realistic self-image as they mature. As children of narcissists become adult, they have to learn that there is a difference between real love and narcissistic “love” and they need to understand that what they have experienced is not “normal”, but is actually intense emotional abuse and constant manipulation.

As McClanahan argues, it’s an uphill battle for children to accept that their narcissistic parents actions and behaviour wasn’t their fault or their responsibility just as it isn’t for any form of child abuse.

[Dr Darryl Cross is a clinical and organisational psychologist as well as a credentialed executive and career coach. He is also an author, facilitator, international speaker and university lecturer. Dr Darryl assists people to find their strengths and reach their goals. He works with businesses to facilitate communication and create positive cultures. Further information on Dr Darryl can be seen at www.DrDarryl.com and www.LeadershipCoaching.com.au he can be contacted at [email protected].com.au]